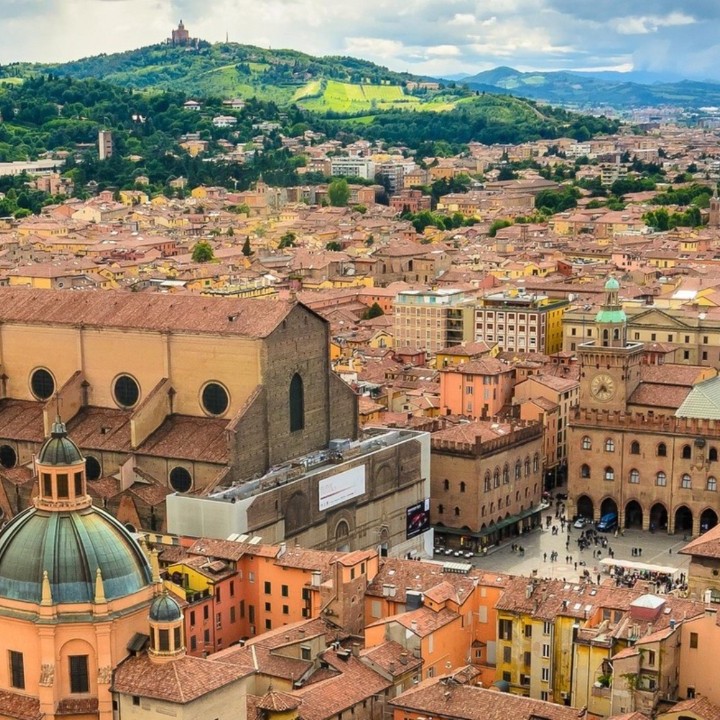 Traveling to Italy and going to visit Bologna?
You are in a right place!

We offer safe, reliable and cost-effective private door-to-door transfers to Bologna from Bologna Guglielmo Marconi Airport (BLQ) and vice versa, as well as any other transfers from Bologna to any destination within Italy or neighboring countries.

Furthermore, you can book our affordable chauffeur service renting a car with driver for several hours or for the whole day to use it in Bologna.

Bologna is the capital and largest city of the Emilia-Romagna region in northern Italy. With about 400,000 inhabitants, it is the seventh largest city in Italy. Over 1,000,000 people live in its metropolitan area. It is known as the Fat, Red and Learned city for its rich cuisine, red Spanish tile roofs and home to the oldest university in the Western world.

Originally Etruscan, the city was one of the most important urban centers for centuries, first under the Etruscans, then under the Romans, and then again in the Middle Ages, as a free commune, when it was one of the most populous cities in Europe. Famous for its towers, churches and long arcades, Bologna has a well-preserved historic center thanks to a careful restoration and conservation policy from the late 1970s. The city is home to the oldest university in the Western world, the University of Bologna, founded in 1088, with a large student population creating the international character of the city. It was named the European Capital of Culture in 2000 and the UNESCO City of Music in 2006. In 2021, UNESCO designated the city's long arcades as a World Heritage Site.

Bologna is a major agricultural, industrial, financial and transport hub, home to many major engineering, electronics and food companies, and one of the largest permanent trade fairs in Europe. According to the latest European Regional Economic Growth Index (E-REGI) data in 2009, Bologna is the first city in Italy and the 47th largest city in Europe in terms of economic growth rate. As a result, Bologna is also one of the most prosperous cities in Italy and is often ranked as one of the top cities in terms of quality of life in the country. In 2020, it ranked first among 107 Italian provinces.

How to get from Bologna to Bologna Guglielmo Marconi Airport

The monorail Marconi Express train connects Bologna Centrale railway station with the airport. Trains run every 7 minutes at pick times, the ride lasts 7 minutes, too. The access to the Marconi Express station is in the train station hall on the side of the Carracci street entry.

Taxi can be more convenient option if your hotel in Bologna is far from the train station, or if you have huge bags to carry. The cost of a taxi from a central location in Bologna to the airport is about 20€. Depending on where you need to go and the traffic, it takes 15 to 30 minutes.

In Italy, you cannot hail a taxi on the street. Therefore, you will need to walk till the nearest public taxi rank or to call a local taxi company by phone. However, it is not always guaranteed that taxi phone operator will be able to speak English. As for the taxi drivers, in Italy they usually do not speak foreign languages.

Uber operates in Bologna only with its Uber Black service (executive cars suitable for maximum two passengers). The approximate cost of a ride from the centre of Bologna to Bologna Guglielmo Marconi Airport is about EUR 27, however this sum may increase due to traffic conditions or elevated demand. Be aware that Uber drivers in Italy commonly do not speak English, either.

Private door-to-door transfer, booked and pre-paid in advance, will be the best option for you if your hotel is far away from Bologna Centrale railway station, if you carry a huge luggage with you, if you want to avoid price discussions, or if you prefer to deal with a driver who speaks your language. The driver will meet you straight at your hotel doors, will help you with your luggage and will safely bring you to the airport or to any other destination in Bologna, in Emilia-Romagna or neighboring region. Click the button below to get our instant quote and book your WelcomeTaxi transfer online.