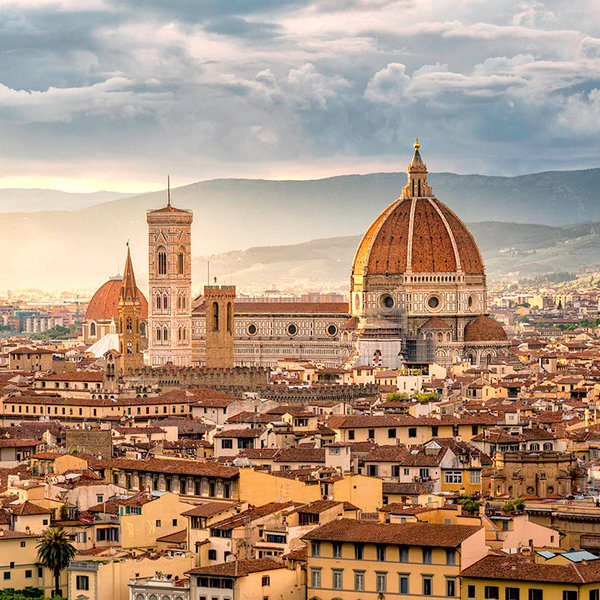 Traveling to Italy and going to visit Florence?
You are in a right place!

We offer safe, reliable and cost-effective private door-to-door transfers to Florence from Florence Airport Peretola (FLR), Pisa International Airport (PSA) and vice versa, as well as any other transfers from Florence to any destination within Italy or neighboring countries.

Furthermore, you can book our affordable chauffeur service renting a car with driver for several hours or for the whole day to use it in Florence.

Florence is a city in central Italy and the capital of the Tuscany region. It is the most populous city in Tuscany with 383,084 inhabitants and over 1,520,000 in its metropolitan area in 2013.

Florence was the center of medieval European trade and finance and one of the most prosperous cities of that period. Considered by many scholars to be the birthplace of the Renaissance, it became an important artistic, cultural, commercial, political, economic and financial center. During this period, Florence had a huge presence in Italy, Europe and beyond. Its turbulent political history includes the reign of the powerful Medici family and numerous religious and republican revolutions. From 1865 to 1871, the city was the capital of the Kingdom of Italy (founded in 1861). The Florentine dialect constitutes standard Italian thanks to the prestige of the masterpieces of Dante Alighieri, Petrarch, Giovanni Boccaccio, Niccolò Machiavelli and Francesco Guciardini It is the basis of the language and has become the cultural language of the whole of Italy.

The city attracts millions of tourists every year, and UNESCO declared Florence's historic center a World Heritage Site in 1982. The city is known for its culture, Renaissance art, architecture and monuments. It is also home to numerous museums and art galleries, such as the Uffizi Gallery and the Palazzo Pitti, which remain influential in art, culture and politics. Forbes named Florence the most beautiful city in the world in 2010 due to its artistic and architectural heritage. Florence has a strong presence in the Italian fashion scene and was named one of the top 15 fashion capitals in the world by the Global Language Monitor. In addition, it is an important national economic center as well as a tourism and industrial center. It is the fourth richest city in Italy.

How to get from Florence to Florence Airport

From February 2019 the new tramway connection T2 between the the city centre (Piazza dell'Unità Italiana near Firenza Santa Maria Novella railway station) and the Florence airport is operational. The tram runs every 7 to 18 minutes from 5:00 am to 0:25 am (Monday to Thursday), to 2:00 am (Friday and Saturday), to 0:25 am (Sunday and holidays). The transit time is 20 minutes. The one-way single ticket costs EUR 1.50.

To get a taxi, you will need to walk to the nearest taxi rank, since it is impossible to hail taxis on the street in Italy. Alternatively, you can call one of the local taxi providers. It takes about 15 minutes to get from the airport to Florence city center, and taxi fare generally runs about €25, but if you order your taxi by phone, don't be surprized when it arrives to you already with some euros on taximeter, since the Italian cabbies turn their taximeter on immediately upon receiving an order, no matter where they are. Be aware that Italian taxi drivers usually do not speak English, and it is not always guaranteed that taxi phone operator will speak English.

Uber is present in Florence only with its Uber Black service. The average cost of a Uber ride from Florence downtown to Florence airport is about €30. As for English, Uber drivers in generally don't speak it, neither.

Private door-to-door transfer will be the most convenient option to get from the city of Florence to Florence Airport. You can book and pre-pay your transfer in advance, and you professional English-speaking driver will meet you straight at the doors of your accomodation, will help you with your luggage and will safely drive you to the airport or to any other destination. Click the button below to get your insdtant quote from WelcomeTaxi and to book your hassle-free transfer online!