Transfers and chauffeur service in Trieste 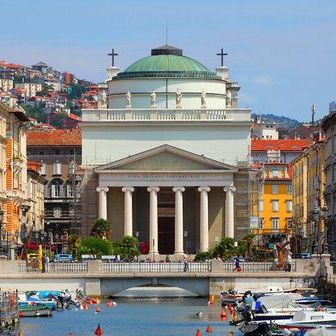 Transfers and chauffeur service in Trieste

Traveling to Italy and going to visit Trieste?
You are in a right place!

We offer safe, reliable and cost-effective private door-to-door transfers to Trieste from Trieste – Friuli Venezia Giulia Airport (TRS) and vice versa, as well as any other transfers from Trieste to any destination within Italy or neighboring countries.

Furthermore, you can book our affordable chauffeur service renting a car with driver for several hours or for the whole day to use it in Trieste.

Trieste is a capital and largest city of Friuli Venezia Giulia, the autonomous region in northeastern Italy. It is also one of the main Italian seaports. The city is situated at the head of the Gulf of Trieste, on a strip of Italian territory located between the Adriatic Sea and Slovenia. In 2018 the population of Trieste was about 205,000.

From 1382 Trieste belonged to the Holy Roman Empire of German Nation (Habsburg Monarchy). Later it was a part of Austro-Hungarian empire until 1918. Since 19th century it was its most important seaport and one of its four largest cities (after Vienna, Budapest, and Prague). It also emerged as an important cosmopolitan culture center. After the World War I Trieste was annexed by Italy and underwent an economic revival during the 1930s. In 1947 Trieste became the capital city of the Free Territory of Trieste governed by British and American occupation authorities. In 1954 this state was dissolved and its territory has been distributed between Italy and Tito's Yugoslavia.

The deep-water Free Port of Trieste is a maritime gateway for Northern Italy, Germany, Austria and Central Europe. Since the 1960s, Trieste has emerged as a prominent research location in Europe due to presence of many international organizations and institutions here. The city is situated at the intersection of Latin, Slavic and Germanic cultures where Central Europe meets the Mediterranean Sea, and is populated by diverse ethnic and religious groups and communities.

How to get from Trieste to Trieste - Friuli Venezia Giulia Airport

Trieste - Friuli Venezia Giulia Airport (TRS) is located in 42 kilimetres north-west of Trieste. You can reach this airport by local public transport, by train, by taxi and by private transfer.

If you intend to use railway, you should take of the trains of Trieste - Venice railway. Trains depart from Trieste Centrale railway station approximately every 15-35 minutes and in about 35 minutes arrive to Trieste Airport railway station located in 455 meters from the airport passenger terminal.

The more comfortable option to get from the city to Trieste Airport is taxi. There is no Uber or any Uber-like apps in Italy, except Uber Black in Rome and Milan. Therefore, to use taxi in Trieste, you should walk to the nearest taxi rank with your luggage or call one of the local taxi providers by phone. Be aware that while some taxi phone operators will presumably speak English, your taxi driver most probably will not speak any foreign language. A taxi ride from Trieste city centre to Trieste Airport will typically cost about 65 euro, but don't be surprized when your cab will arrive to you already with some euros on its taximeter, since the drivers switch their taximeter immediately after receiving the phone order, no matter where they are.

The most reliable and hassle-free option to get from Trieste to Trieste Airport is a private transfer on fixed rate. If you book and pre-pay it in advance, you have not to worry about anything else. Your driver will meet you at the doors of your hotel precisely at the ordered pickup time, will help you with your luggage and will safely drive you to the airport. All WelcomeTaxi drivers speak English and very often also one of the other European languages.