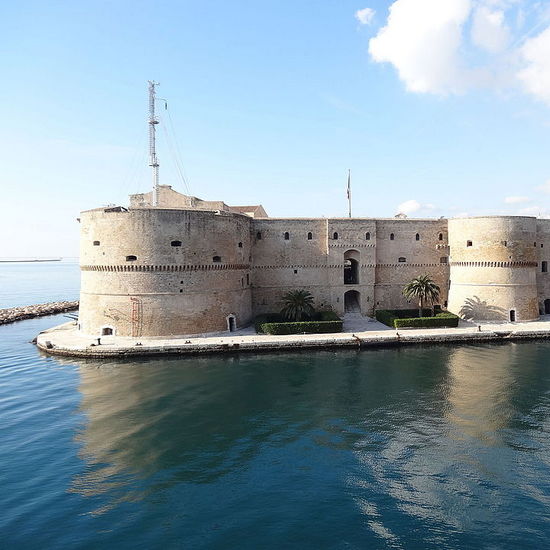 Traveling to Italy and going to visit Taranto?
You are in a right place!

We offer safe, reliable and cost-effective private door-to-door transfers to Taranto from Brindisi Airport (BDS), Bari Karol Wojtyła Airport (BRI) and vice versa, as well as any other transfers from Taranto to any destination within Italy or neighboring countries.

Furthermore, you can book our affordable chauffeur service renting a car with driver for several hours or for the whole day to use it in Taranto.

Taranto is a coastal town in the Puglia region of southern Italy. It is the capital of the province of Taranto, an important commercial port and a major Italian naval base.

Founded by the Spartans in the 8th century BC, during the Greek colonial period, Taranto was one of the most important cities in Greater Greece and became a cultural, economic and military force that inspired philosophers, strategists, writers and athletes such as Archytas, Aristoxenus, Livius Andronicus, Heracleides, Iccus, Kleinias, Leonidas, Lysis and Socibius. Around 500 BC the city was one of the largest in the world, with an estimated population of up to 300,000 people. Architas' seven-year reign marked the culmination of his development and recognition of his hegemony over other Greek colonies in southern Italy.

During the Norman period, it became the capital of the Duchy of Taranto, which covered almost the whole of Puglia.

How to get from Taranto to Bari and Brindisi airports

Although Taranto-Grottaglie Airport (TAR) is only 16 km from Taranto, but there are no regular commercial flights. The two nearest airports with regular flights are in Brindisi and Bari, approximately 70 km and 90 km away respectively.

Getting from Taranto to Brindisi Airport (BDS) by public transport

There are direct buses from Taranto to Brindisi. These connections run four to five times a day, Monday through Saturday. The bus journey between Taranto and Brindisi Airport (BDS) takes approximately 1 hour 10 minutes and travels approximately 71 kilometers. The bus service from Taranto to Brindisi Airport (BDS) operated by Pugliairbus departs from Via Luigi Mascherpa in the centre of Taranto. A one-way ticket costs 11 euros.

Getting from Taranto to Brindisi Airport by taxi

The typical journey from Taranto city centre to Brindisi Airport (BDS) will last about 1 hour and will cost 130 to 160 EUR. Take in consideration that to take a taxi in Taranto, you will need to walk to the nearest public taxi rank, since in Italy normally you cannot just hail a taxi on the street as you do in New York. Alternatively, you can order your taxi calling by phone one of the local taxi providers. But be aware, that not only taxi drivers but even phone operators here will rarely be able to speak English. As for Uber, it is unavailable in Taranto.

Private transfer from Taranto to Bari Airport or to Brindisi Airport

Private door-to-door transfer is of course the most convenient option to get from Taranto to one of the nearest airports. All what you need is to book and pre-pay your transfer online in advance. Your professional English-speaking chauffeur will meet you straight at your accomodation, will help you with your luggage and will safely and quickly drive you to the airport or to any other destination at your choice. Click the button below to get the instant quote from us and to book your transfer online, right now!