Transfers and chauffeur service in Turin 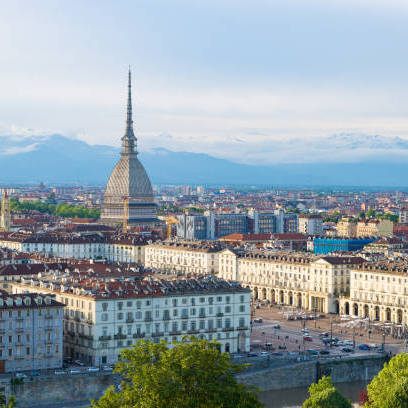 Transfers and chauffeur service in Turin

Traveling to Italy and going to visit Turin?
You are in a right place!

We offer safe, reliable and cost-effective private door-to-door transfers to Turin from Turin Airport (TRN) and vice versa, as well as any other transfers from Turin to any destination within Italy or neighboring countries.

Furthermore, you can book our affordable chauffeur service renting a car with driver for several hours or for the whole day to use it in Turin.

Turin is a city in northern Italy and an important commercial and cultural center. It is the capital of Piedmont region and the first Italian capital from 1861 to 1865. The population of the urban area is 848,885 (as of 31 December 2021), while Eurostat estimates the population of the metropolitan area at 1.7 million.

The city was once an important political center in Europe. From 1563 it was the capital of the Duchy of Savoy, then the capital of the Kingdom of Sardinia ruled by the Savoy family, and the first capital of the Kingdom of Italy from 1861 to 1865. Turin is sometimes called "the cradle of Italian freedom" because it was the political and intellectual center of the Risorgimento (Italian revival movement) and the birthplace of famous figures who contributed to it, such as Cavour. Although much of its political influence had been lost until World War II, Turin, despite being the center of the anti-fascist movement during the Ventenio period, including the Italian Resistance, became an important industrial, trade and commercial center in Europe. Being part of the "Industrial Triangle" with Milan and Genoa it ranks third in Italy after Milan and Rome on the economical strenght. Turin is also home to much of Italy's car making industry, with headquarters of Fiat, Lancia and Alfa Romeo.

Rich in culture and history, the city is known for its numerous art galleries, restaurants, churches, palaces, opera houses, squares, parks, gardens, theatres, libraries, museums and other venues. Turin is famous for its Baroque, Rococo, Neoclassical and Art Nouveau architecture. Part of the historic center of Turin is inscribed on the World Heritage List in the name of the Savoy Royal Residence. In addition, the city has museums such as the Museo Egizio and Mole Antonelliana, the city's architectural landmarks. Turin's attractions make it one of the world's 250 most popular tourist destinations and the 10th most visited city in Italy in 2008.

The city is also home to some of the best universities, colleges, academies, secondary schools and high schools in Italy, such as the University of Turin and the Politecnico di Torino, founded in the 15th century.

How to get from Turin city center to Turin Airport

The buses between the center of Turin and the Turin airport run every 15-30 minutes from the main railway stations of Turin - Porta Nuova and Porta Susa, with additional stops at Corso Umbria corner via Livorno, Piazza Stampalia (GTT train stop) and Borgaro Torinese. Approximate Journey time is 45-50 minutes. Single ticket price is 7,00€ (+1,00€ surcharge to be paid aboard). Tickets are sold in cafés nearby the bus terminal.

As for March 2022, due to the works the GTT trains operate only between Venaria station and Turin Airport. The connection Torino Porta Susa station - Venaria station (and vice versa) is guaranteed by the buses of the SF2 line.

Uber is not operating in Turin, therefore to get from Turin to Turin Airport you should walk to the nearest public taxi rank, since in Itay you cannot hail a taxi on the street. Alternatively, you can call any of the local taxi companies. The typical cost of a taxi ride from Turin downtown to Turin Airport is about EUR 50. But don't be surprized if your ordered taxi will arrive already with some euros on its taximeter, since Italian taxi drivers switch their taximeter on immediately upon receiving phone order, no matter where they are.

The most convenient way to get from Turin to Turin Airport is a private door-to-door transfer. If you book it and pre-pay at WelcomeTaxi, our English-speaking driver will meet you at your doors, will help you with your luggage and will safely drive you to the airport or to any other destination you may need.